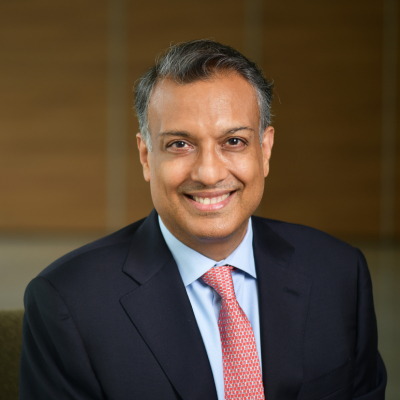 A leading first-generation entrepreneur, Sumant Sinha is the Founder, Chairman and Managing Director of ReNew Power – one of India’s largest clean energy companies. Sumant founded ReNew Power in January 2011, with a vision to transform the way energy is produced and consumed in India. Since then, under his leadership, the company has grown exponentially and is today one of India’s premier renewable energy companies with an aggregate portfolio of 10 GW spread over more than 100 sites. ReNew has been funded by marquee investors including Goldman Sachs, CPPIB (largest Canadian pension fund), ADIA (sovereign wealth fund in the Middle East) and JERA (leading Japanese utility), and has raised more than USD 6.5 billion of capital, both equity and debt. ReNew has emerged as one of the leading asset creators in the country over the last 5 years. It now generates one per cent of India’s total electricity annually, and in doing so helps mitigate half a per cent of India’s carbon emissions in a year.

Sumant is a passionate advocate for solutions related to climate change and sustainable development and has spoken at various thought leadership platforms, such as World Economic Forum at Davos, Climate Week NYC, CERA Week and other forums organized by Financial Times, ORF as well as leading global universities. He has written more than 150 opinion articles in leading global and Indian publications on the pressing issues of climate change, renewable energy and sustainable economic growth. Sumant has recently written a book – Fossil Free: Reimagining Clean Energy in a Carbon-Constrained World which is about the past, present and future of the world’s energy systems in the context of the world’s changing climate and spells out a playbook to create a carbon light future for India. Former Vice President Al Gore describes the book as “a compelling roadmap to a better, cleaner future for India—and other developing regions of the world”. Sumant has been recognized as an SDG Pioneer by the United Nations Global Compact, a first for any Indian business leader, for his work in the areas of energy transition and gender equality.

Sumant is Co-Chair, Electricity Governor’s Group and member of the Stewardship Board on Shaping the Future of Energy at the World Economic Forum. He serves on the Board of Directors of the US India Strategic Partnership Forum (USISPF) and Member of the Board of Trustees, for The Climate Change Organization and Chair, India Advisory Group, The Climate Group. Sumant is Senior Vice President of the Associated Chambers of Commerce & Industry of India (ASSOCHAM) and member - Advisory Committee of India Climate Collaborative- a platform promoting policy advocacy and thought leadership on climate change. He is on the Board of Governors of IIM Calcutta, IIT Delhi and Columbia University’s School of International and Public Affairs (SIPA).

For his achievements in entrepreneurship and clean energy, Sumant has won several awards and recognitions including “Chairman Of The Year” at the Stevie International Business Awards 2020, The Entrepreneur India’s Entrepreneur of the Year award, 2019, the coveted “Economic Times Entrepreneur of the Year Award’ 2018, “EY Entrepreneur of the Year”, 2017” and “Outstanding Start-up of the Year”- Forbes India Leadership Awards 2017 for ReNew Power. After starting his career in the Tata Administrative Service, Sumant worked as an investment banker with Citicorp and ING Barings in the US and UK, before heading finance in one of India’s largest conglomerates, the Aditya Birla Group. He was also COO of Suzlon, India’s largest wind turbine company. Sumant has a Master’s degree in International Affairs from Columbia University, a diploma in business management from the Indian Institute of Management Calcutta and also a B. Tech from the Indian Institute of Technology Delhi.