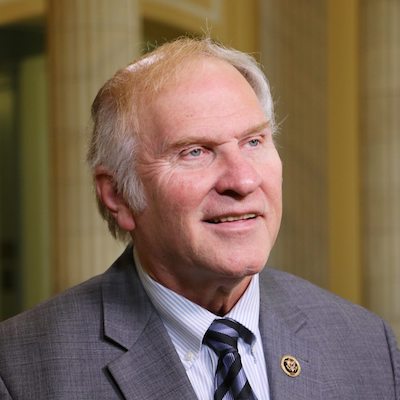 Congressman Steve Chabot has proudly served Ohio’s First Congressional District for 24 years. A lifelong Cincinnatian, Steve previously served as a Cincinnati City Councilman and Hamilton County Commissioner for five years each prior to being elected to Congress in 1994.

Steve continues to fight wasteful government spending in Congress, where he is one of the leading advocates for fiscal responsibility. He has consistently voted to eliminate wasteful spending and reduce the excessive tax burden on hard-working Americans. Nonpartisan taxpayer advocacy groups such as Citizens Against Government Waste, the Concord Coalition and the National Taxpayers Union have time and again rated him as one of the most taxpayer friendly members of Congress.

While in Congress, Steve has also helped lead efforts to reduce the regulatory burden on America’s small businesses, and to combat the opioid epidemic. He is an outspoken defender of the rights of the unborn, most importantly having authored the ban on the practice of partial-birth abortions.

During the COVID-19 pandemic, as Ranking Member of the House Small Business Committee, Steve worked closely with Democratic Chairwoman Nydia Velazquez and their colleagues in the Senate to help craft, enact, implement and improve the Paycheck Protection Program.  This critical program provided forgivable loans to small businesses struggling to survive the economic shutdowns implemented by states across the country, provided that the businesses kept their employees on payroll.  Ultimately, the program helped to save over 50 million jobs nationwide, including more than 256,000 in the First Congressional District.

In January 1999, Congressman Chabot served as one of 13 House Managers during the Senate impeachment trial of President Bill Clinton, where he received praise for his even-handed and thoughtful approach to the trial.

Steve graduated from LaSalle High School in 1971, and earned his undergraduate degree from the College of William and Mary four years later. After college, he returned to Cincinnati to teach at St. Joseph’s School in the West End, while studying at Northern Kentucky University’s Salmon P. Chase College of Law in the evening.

Steve and his wife, Donna, live in the Cincinnati neighborhood of Westwood. They have two children, Erica and Randy, and are the proud grandparents of Reed and Keira Noelle.