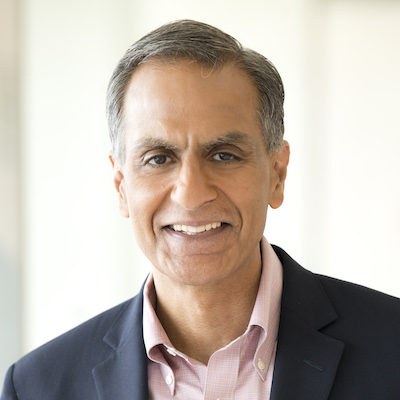 Rich Verma is the General Counsel and Head of Global Public Policy for Mastercard. In this role, he oversees the company's law and policy functions in the United States and around the world. Rich brings over 25 years of international experience across senior levels of business, law, diplomacy and the military. He is a member of the company's Management Committee.

Rich previously served as the U.S. Ambassador to India, where he led one of the largest U.S. diplomatic missions and championed historic progress in bilateral cooperation on defense, trade, and clean energy. He is a former Assistant Secretary of State and he also worked on Capitol Hill as the National Security Advisor to the Senate Majority Leader.

He practiced law for many years at Steptoe & Johnson in Washington, D.C. and is the former Vice Chairman of The Asia Group, a leading international consulting firm. In addition, Rich is a veteran of the U.S. Air Force, and the recipient of a number of military awards and civilian decorations, including the Meritorious Service Medal and the State Department's Distinguished Service Award.

Rich is a Senior Fellow at Harvard University's Belfer Center for Science and International Affairs and a trustee of Lehigh University. He serves on a number of boards and commissions, including the T. Rowe Price corporate board and the National Endowment for Democracy board of directors.

Rich holds multiple degrees, including his doctorate (Ph.D.) from Georgetown University and his law degree (J.D.) from American University.