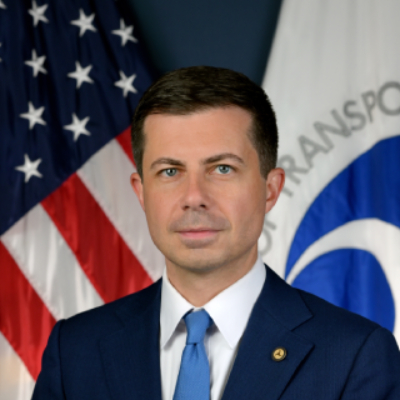 Pete Buttigieg serves as the 19th Secretary of Transportation, having been sworn in on February 3, 2021.

As Secretary, Mr. Buttigieg is to deliver the world’s leading transportation system for the American people and economy. He has worked to achieve organizational excellence in the department’s operations, and to focus the department on five policy goals: safety, jobs, equity, climate, and innovation. In his first year at the Department, he prioritized supporting the development and passage of President Biden’s signature Bipartisan Infrastructure Law. Since the law’s passage, Secretary Buttigieg and his team have focused on effectively delivering the investments provided by this legislation, enabling the most significant improvements in U.S. transportation infrastructure in over half a century.

The Secretary has also focused on intervening to support American supply chains dealing with shockwaves from the pandemic, including measures to help cut in half the long-dwelling container congestion at America’s largest ports. Other major initiatives in his early tenure have included a comprehensive national roadway safety strategy to reduce deaths and serious injuries; delivery of emergency COVID-19 relief funds to transit agencies across America; and awards of over $9.5 billion in discretionary funding to enhance transportation through over 800 projects in communities across America.

The first openly gay person confirmed to serve in a president’s Cabinet, Secretary Buttigieg previously served two terms as mayor of his hometown, South Bend, Indiana, where he worked across the aisle to transform the city’s future. Household income grew, poverty fell, and unemployment was cut in half. His work on transportation as mayor was nationally recognized, including an award for innovative streetscape design from the U.S. Department of Transportation where he now serves.

Secretary Buttigieg also served for seven years as an officer in the U.S. Navy Reserve, taking a leave of absence from the mayor’s office for a deployment to Afghanistan in 2014.

The son of Joseph Buttigieg, who immigrated to the United States from Malta, and Jennifer Anne Montgomery, a fifth-generation Hoosier, Secretary Buttigieg is a graduate of Harvard University and Oxford, where he was a Rhodes Scholar and completed a degree in philosophy, politics, and economics. He lives with his husband Chasten, their two children, Gus and Penelope, and their two dogs.