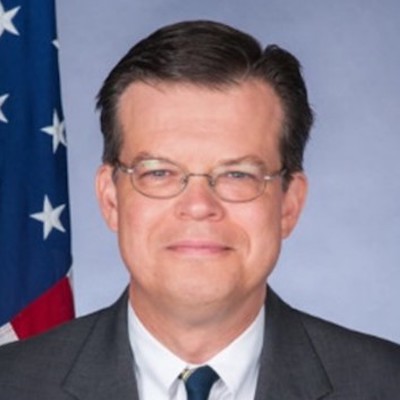 Nathaniel P. Dean is currently serving as Acting Deputy Assistant Secretary of State for Energy Diplomacy.  He served as the Director of the Office of Energy Diplomacy for Europe, Western Hemisphere, and Africa in the Bureau of Energy Resources at the Department of State from 2020-21.  From 2017-20, he served as Deputy Chief of Mission of the U.S. Embassy in Nicosia, Cyprus.  He was Director of the Office of Nordic and Baltic Affairs in the State Department’s Bureau of European and Eurasian Affairs from 2015 to 2017.  Prior to that assignment, he served as Director for Central and Northern European Affairs on the National Security Council Staff.  Other assignments have included service as Deputy Political Counselor, U.S. Embassy Berlin, as Deputy Director, Office of European Union Affairs, and in the Office of Maritime Southeast Asian Affairs.  His early assignments were in the Netherlands, Washington, and Mexico.  He holds a BA in History from Trinity College and is a Fellow of MIT’s Seminar XXI program.