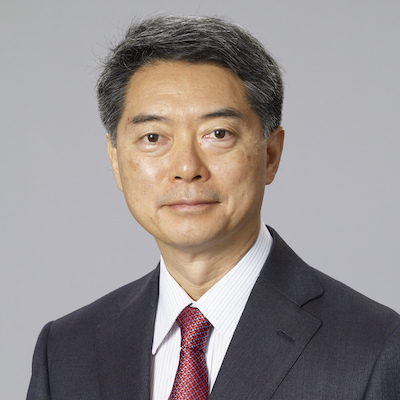 Mr. Hirose has served in the Ministry of Economy, Trade and Industry (METI) for more than 35 years, with extensive experience in the field of trade policy. He was appointed as Vice-Minister for International Affairs in July 2021. He leads all of METI’s international policy operations and represents the ministry in cross-border economic dialogues and negotiations, and travels alongside the Prime Minister on overseas missions to advise on economic, trade, industrial and energy policy.

Prior to his current position, Mr. Hirose has served as Director-General, Trade Policy Bureau since July 2019, responsible for all of METI’s trade policy matters, including bilateral, plurilateral, regional and multilateral issues, such as Japan-US Trade Agreement, Regional Comprehensive Economic Partnership (RCEP), and WTO reform.

From 2014 to 2015, Mr. Hirose served as Director-General of the Multilateral Trade System Department, where he participated in the Trans-Pacific Partnership (TPP) negotiation as METI’s lead negotiator, and played a central role in successfully reaching the agreement in Atlanta.

From 2002 to 2005, Mr. Hirose served as Counsellor at the Japanese Mission in Geneva, where he was responsible for the Rules negotiation in the Doha Round, and served as Chairman of the WTO Subsidies Committee and Member of the Panel in the EC-Sugar case. In 2005, he returned to Tokyo and served as Director of the Multilateral Trade System Department until 2008, where he continued his work in the Doha Round, along with trade negotiations in the field of intellectual property.

From 1994 to 1997, Mr. Hirose served as First Secretary at the Japanese Embassy in Washington D.C., where he dealt with various issues in the Japan-U.S. bilateral trade relationship, including automobiles.

Mr. Hirose’s career also covers a wide range of other fields in economic and industrial policy. These include Deputy Director-General of the Economic Revitalization Bureau at the Cabinet Secretariat, where he was the lead government-wide coordinator of the “Abenomics” growth strategy, promoting investment, R&D and start-up businesses, corporate governance, and deregulation. His prior experience at METI also includes environmental policy, and industrial policy for the aerospace industry.

Mr. Hirose received his BA in Law from University of Tokyo in 1986 and his Master in Public Affairs (MPA from the Woodrow Wilson School at Princeton University in 1992.Mr. Hirose was born on March 28, 1963 in Tokyo. He lives with his wife and his son in Tokyo.