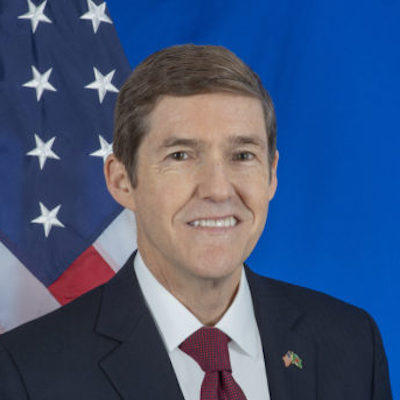 The People’s Republic of Bangladesh

Earl R. Miller was sworn in as U.S. Ambassador to the People’s Republic of Bangladesh on November 13, 2018.  Ambassador Miller served as U.S. Ambassador to the Republic of Botswana from 2014 – 2018.  Ambassador Miller, a career member of the U.S. Senior Foreign Service, joined the Department of State in 1987.  He served as U.S. Consul General in Johannesburg, South Africa, and at U.S. embassies in India, Iraq, Indonesia, Malaysia, and El Salvador.

Ambassador Miller is honored to have the opportunity to serve in Bangladesh, one of the world’s great development success stories, a vital nation of promise and opportunity poised to play an even larger role on the regional and global stage, and a strong and valued partner with the United States.

Ambassador Miller is a graduate of the University of Michigan and a former U.S. Marine Corps officer.  He is the recipient of numerous U.S. government honors including the Department of State’s Award for Heroism, and the Federal Bureau of Investigation’s Shield of Bravery.  Ambassador Miller speaks French, Spanish and Indonesian.